Discover Porec: get there from Venice with Venezia Lines

A mosaic of experiences

Porec is a town located in the heart of the western coast of Istria. It is a town of culture, tourism, sport and entertainment. It has been recognised and awarded for the beauty of its public space and its cleanliness many times over.

It combines rich tradition, stunning buildings and exciting venues. In fact, it has been considered to be the capital of Croatian tourism for many years. Over 2000 years old, the city offers visitors a glance into the past. It offers historical buildings and churches from the Byzantine, Venetian and Roman periods as well as stone-paved streets built during the Roman times.

The town has a long and turbulent history which nurtures remnants of its past in the heart of its old town. The streets of Porec continue to preserve their original architecture and numerous cultural and historical monuments.

Of these we can especially note the Euphrasian Basilica with its distinctive mosaics dating from the 6th century which UNESCO recognised and protected as a world heritage site in 1997. It is famous for its beautiful gold mosaics as well as interior and exterior architecture.

We also suggest to visit the 3 towers (Pentagon, Round and North) which were built in the 15th century. These were once connected by walls that protected the old city. The Pentagon tower guarded the entrance into the old heart of the city.

Its’ attractive location, allows guests of Porec the possibility to visit other important localities within its vicinity. One of the most beautiful cities in the world, Venice, the Brijuni National Park, the Baredine Caves, the Roman Arena in Pula, the Pazin Chasm and the Lim Fjord.

The Baredine Cave in particular is one of many wonders of nature. Over the years the relentless work of water has shaped the stalactites and stalagmites into recognisable forms.

Aside from its culture and tourism, Porec also has a sports and entertainment side. Almost every hotel has a summer terrace, and hot summer nights in Porec are enriched by numerous restaurants, discotheques, night clubs, bars and casinos.

Porec is surely the pearl of Croatian tourism which offers its visitors a different kind of holiday full of entertainment and events. In short, a mosaic of experiences. 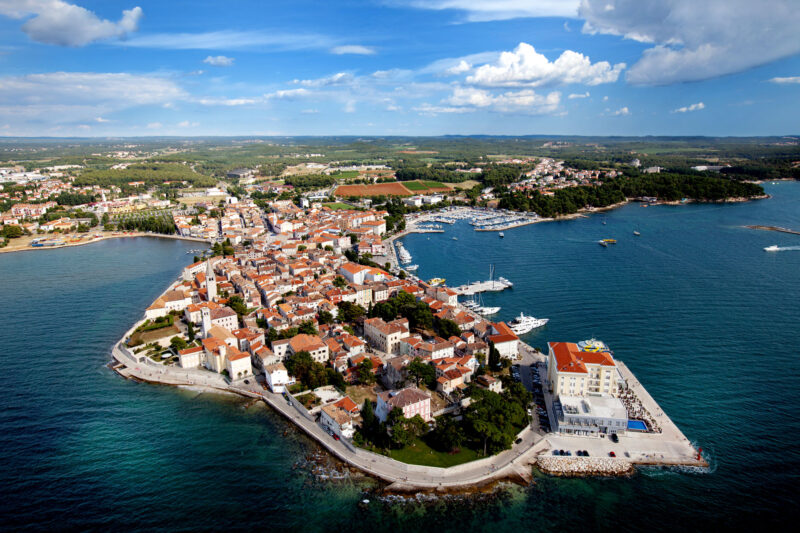