Pula is the largest old city in Istria County. The natural beauty of Pula’s surrounding countryside and turquoise water of the Adriatic have made the city an internationally popular summer vacation destination. It is situated at the southern tip of the Istria peninsula and lies on and beneath seven hills on the inner part of a wide gulf and a naturally well-protected port open to the northwest with two entrances: from the sea and through Fažana channel. From the north it is protected by the mountain chain of Alps as well the inner highland, the climate is Mediterranean, very pleasant. Summers are usually warm during the day with the highest air temperature averaging 24 °C during August and cooler near the evening.

Like the rest of the region, it is known for its mild climate, tame sea, and unspoiled nature.

Istria’s administrative centre since ancient Roman times, the city has a long tradition of tourism, wine making, fishing and shipbuilding.

The city was built 3000 years ago and as a result of its rich political history, Pula is a city with a cultural mixture of people and languages from the Mediterranean and Central Europe, ancient and contemporary. Pula’s architecture reflects these layers of history. There is a wealthy collection of monuments, architectural accomplishments, fortresses and all sorts of remains from the Roman time. The most famous of all is the Roman amphitheatre. This symbol of Pula, popularly called the Arena, is the sixth largest remaining amphitheatre in the world. In the 1st century, when it was built, it was used for gladiator contests in front of 23.000 spectators. Today it is so well preserved that it is still regularly used for concerts or other major cultural events such as film festivals throughout the summer.

A perfect place to start exploring the Roman ruins is the Forum – the oldest square in the town. Visit the beautiful Temple of Augustus and continue by passing through Triumphal Arch of Sergius – The Golden Gate. Twin gates were used as entrance into the town during ancient and medieval times when Pula was surrounded by walls. There are many churches worth being visited, such as the Byzantine Chapel of St. Mary Formosa, the Church of St. Francis and the Cathedral of the Assumption of the Blessed Virgin Mary. Please take time for visiting also the Archaeological Museum of Istria. 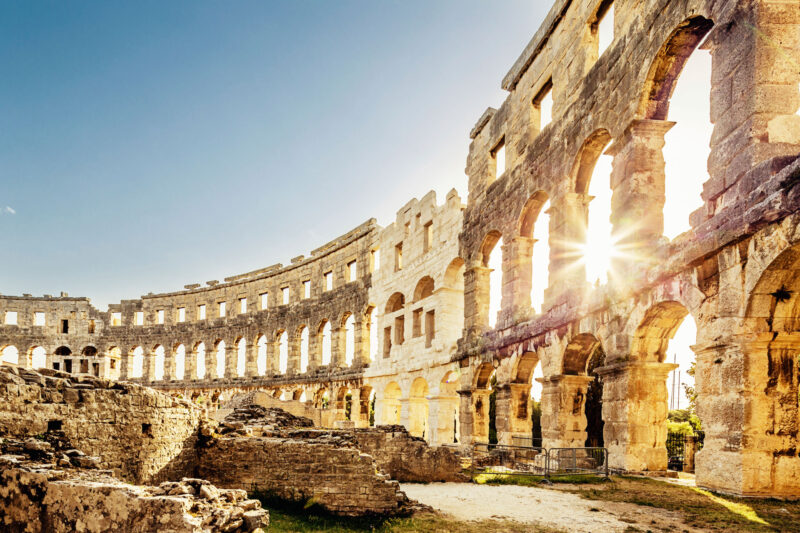 Among the natural beauties the pearl nearby is Brijuni national park visited by numerous world leaders since it was the summer residence of Josip Broz Tito. Roman villas and temples still lie buried among farm fields and along the shoreline of the dozens of surrounding fishing and farming villages. A group of 14 islands scattered on the northwest of Pula this national park hosts exotic animals given to Tito by world leaders. 680 species of plant create a comfort area. Sophia Loren, Elizabeth Taylor and Richard Burton were just few of those who were astonished by the beauty of these islands.

Cape Kamenjak is another famous nature park that lies on the southernmost point of whole Istrian peninsula. Explore its numerous coves and miniature beaches that lie on a 30 km long coast. Visit the lighthouse on the small island of Porer and enjoy one of the most beautiful sunsets available from the Adriatic coast.

The coastal waters offer beaches, fishing, wreck dives to ancient Roman galleys and World War I warships, cliff diving, and sailing to unspoiled coves and islands large and small. It is possible to track dinosaur footprints on the nearby sea shores.

Over the time Pula has been an inspiration to many famous artists and writers. Contrary to the old heart of the city, the rest of Pula is quite modern and contains many supermarkets, shopping centres, boutiques and popular cafes. Pula ‘s nightlife and cultural activities are the best in Istria. At the Arena you can enjoy concerts which range from classical music to the most popular and world famous musicians. Arena film festival, the Opera festival and a lot of other manifestations are worth watching.

Spend some time in Pula, you won’t regret it! 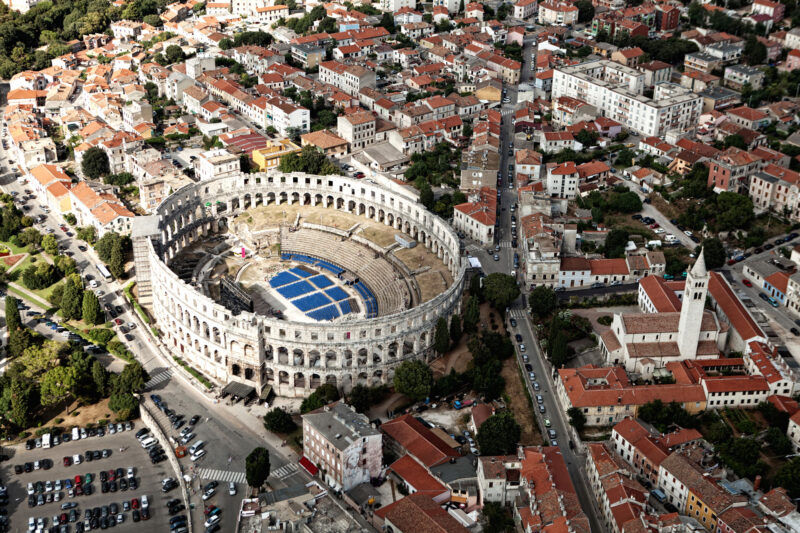