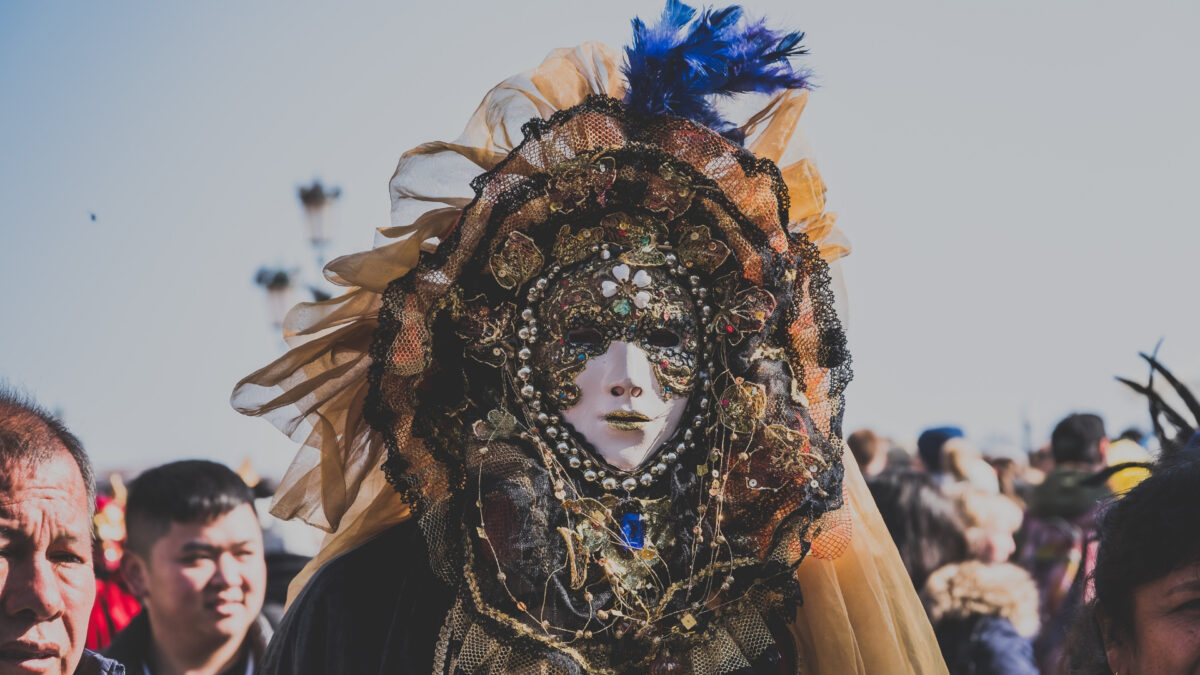 The Venice Carnival Between Tradition and Modernity

The Venice Carnival is the most popular in Italy and one of the most famous worldwide.

Thousands of visitors flock to Venice every year, sporting masks and costumes of all kinds.

But not everyone knows the story behind this event and how it has evolved over the years. So, let’s dive in and discover everything there is to know about the Venice Carnival.

How It All Began: History of the Venice Carnival

The Venetian Carnival is a fascinating blend of sacred and profane. The word “carnival” comes from the Latin expression “carnem levare” (to remove meat). That’s because Carnival is the final festivity before Lent, during which Roman Catholics abstain from eating meat.

To trace the origin of Carnival, we have to go all the way back to an ancient Roman festival. During that time, the strict social hierarchy was inverted, so people feasted, played games together and made jokes about taboo topics, such as sex and religion.

A 1262 edict of the Senate of the Republic of Venice was the first document to mention the Venice Carnival as a public holiday. However, Venetian artisans had already started making carnival masks at least 20 years before that.

The Venice Carnival reached its peak in the 18th century, attracting people from all over Europe.

The festival has always been all about fun, lightheartedness, transgression, and the art of masquerading. In those days, Venice becomes an extravaganza of beautiful masks and costumes.

The Masks Stars of the Venice Carnival

When you mention the Venice Carnival, Bauta is the first costume that comes to mind. It consists of a black cape, a black tricorn hat, and a white mask that becomes wider over the mouth.

This mask covers the entire face, and the narrow nose area distorts the wearer’s voice, ensuring total anonymity even for women.

If Bauta is the perfect costume for men and women, the Moretta is the classic women’s mask. This black velvet mask is kept in place not by elastic bands but by a button the wearer holds between her lips. For this reason, this mask is also known as the “mute mask” or as servetta muta. (mute servant).

During the festivities, it wasn’t uncommon for men to dress up as women and, in particular, as Gnaga, a silly commoner woman. In addition to these typical Venetian masks, we cannot forget the classic Commedia dell’Arte masks, such as Harlequin and Columbina.

The Venice Carnival always began with a parade that started in Campo Santo Stefano, where the famous Liston (i.e., the list of all participating masks) was. Nowadays, the parade takes place in St. Mark’s Square.

During the Venice Carnival, everything was allowed, even gambling. Some of the smaller houses were even converted into casinos known as Ridotti, where people had to wear masks to enter.

Today, the Venice Carnival is a much-awaited festival with many traditional events, including the Beheading of the Bull and the Flight of the Angel.

The Beheading of the Bull

This tradition stems from a festival celebrated every year starting from 1162. The celebrations included killing a bull and 12 pigs to commemorate the victory of Venice’s Doge, Vitale Michiel II, following an attack by Ulrich, the Patriarch of Aquileia.

This is also where the Italian expression tagliare la testa al toro (literally “to chop the bull’s head off”) comes from. This expression is used to urge someone to make a decision to solve a matter.

However, the tradition changed in 1523. After that date, the executed bulls became three, but pigs were no longer used. Luckily, nowadays, no animal is killed during the event.

The Flight of the Angel

The Flight of the Angel in St. Mark’s Square opens the Venice Carnival.

This tradition dates back to the mid-16th century when a Turkish acrobat walked on a rope from a boat to the Doge’s Palace balcony to pay homage to the Doge. This performance became known as the Flight of the Turk and was repeated every year until 1759, when it ended in tragedy.

From then on, a giant wooden dove was used instead of people. That’s why the event changed its name to Flight of the Dove.

The Flight of the Angel made its comeback in 2001, with a real person gliding on a harness.

When Does the Venice Carnival Take Place?

Events, parties, and parades will transform the city during those two weeks.

Public transport will be increased during the Carnival days. Moreover, visitors can use the Venezia Unica city pass. This city pass allows you to use local public transport, access tourist attractions and cultural events, and other services, including car parks.

There are many ways to get to Venice. You can land at the Marco Polo airport, or if you’re in Italy or a nearby country, you can easily come by car or train. Many choose to reach the “city of water” by ferry.

Experiencing the Venice Carnival has never been easier!